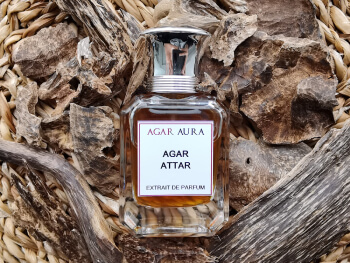 Agar Attar is what 'oud perfume' ought to smell like.
Ouds from various regions of the oud producing world were blended with precision with the aim of allowing every oud profile to play a role in the symphony, without any erratic notes jutting out or awkward transitions as the scent evolves on your skin.

If you have yet to experience real, well-distilled, high quality, high grade oud oil (and your only reference to oud is what's called 'oud' in mainstream perfumery) prepare to be amazed.
Boasting the most diverse array of aromatic compounds of any natural substance, oud is NOT a perfumery 'note' as it has been reduced to in mainstream perfumery. Nay, oud by its very nature is a complete perfume, nature's very own work of art. And Agar Attar is a summation of the oud experience.

How there can be blueberries and blue lotus in Bruneian oud, or clementine and vanilla in Malinau oud, the addictive cola and pepper in west Malaysian gaharu, the heaven-meets-jungle-meets-earth in Papuan aloes, that heart-melting iris in Maluku sirsak, and how about the mouthwatering dried fruit in Cambodian khlem chan, the vanilla and mint in Vietnamese oud, the rugged wood and zesty herbs in Thai and Laotian kritsana, and the infamous sweet hay, leather, and sweet spices in Indian and Myanma oud... and then some... and THEN some...
...it is the reason why real, well-distilled, high quality, high grade oud oil is often the last step of the ladder for many fragheads, who end up falling out of love with their massive collections of perfumes.
Nothing comes close to oud.

Not all oud oils blend well with each other, so it was no easy feat putting Agar Attar together. What you have here is the 'universal' oud aroma that covers every brilliant facet of the gem we call oud, in a seamlessly blended perfume (with other essential oils acting as bridges between the different facets).

If you're new to oud, there is no better way to dive head first into the world of oud than to make Agar Attar your launch pad. In fact, you could spray this on right before a business meeting or social gathering and no one would find it objectionable in the least. On the contrary, you might get lots of folks asking you about the source of the enchanting aura surrounding you. Agar Attar... oud perfume redefined.

It’s really opening my eyes to the cola note in Malaysian oud. It opens on my skin as straight Dr. Pepper. Incredible complexity in the dry down.
T.L. (Japan)

Agar is my favorite (absolutely outstanding) of the ones I've tried...
M.M. (Japan)

Really enjoying these this weekend. It’s interesting the contrast between the Kinam and Agar attars they are both very satisfying in different ways. I would struggle to pick a winner here!
J.W. (UK)

I was gonna say, what is this Agar Attar?? Not literally speaking, but i mean the cola, the slight minty facets - its incredible. Ive enjoyed all four of them but that one is something else!
D.D. (Canada)

Sitting here in 4 sprays of Agar Attar. This is the best I’ve ever smelt. I’m relaxed my mind is numb I’ve never experienced anything like this. You Sir are a Magician
R.L. (Canada)

Agar attar is really really something else my goodness. I wanna drench myself in it 🤣
P.L. (Malaysia)

Taha. Why? Why did you make these Extraits so damn good?? 😄 I do not need to buy any more perfumes man! Haha! I am still processing but I will probably want to make another preorder of one or two of these. Hoping that’s possible. I love Amouage and have a lot of their vintage sprays and Attars, some of which are my favorite perfumes. Agar Attar is what a house like Amouage wishes their Oud perfumes would smell like.
M.T. (USA)

Btw, the agar attar is ****. It is a kaleidoscope of oud notes revolving around my nose
P.O. (USA)

Just outstanding . I think you may have surpassed even your first collection . I’ve just seen the note breakdown now on agar attar and it makes sense now , on a full wearing I was picking up berry or what I thought was maybe raspberry plus a lot of other nuances . There are actually a lot of ingredients in this one I see now but they are so seamlessly blended . What I find with some natural houses is they throw in a lot of rare ingredients , piled on top of each other and what you end up with is almost like a huge cloud but yours are so just much more structured and refined and actually say something
M.N. (UK)

The oil is marvelous. This is so good and so suitable for western nose. Not challenging at all. Starts off super green but soon becomes sweety, oudhy supported by sandalwood, cinnamon notes. Somewhere in the middle it reminds me of Kyara to Byakhudan but soon evolves into a very distinct dry down.Very nice!!! You are a genius!!!
D.J. (USA)

I like it a lot. It starts with a note of green frankincense and oud, then morphs into a smooth agarwood scent that is softly supported by cinnamon, clove, and some sandalwood. It reminds me, to a certain degree, of Jinkoh to Byakudan. However, Agar Attar is stronger, and way more "oudy" than the JTB.
The mixture of Agallocha, Malaccensis, and Crassna oud contributes to a soft transition from "darker", heavier notes (from the Agallocha) to the softer Crassna and Malaccensis notes. Delicious, well-rounded; and a great addition to my collection.
T.S. (Germany)

Very excited about receiving my Agar Atar
Everybody comments on it and wants to know what it is - I think you'll have a lot of customers from Ireland !!
B.H. (Ireland)

Taha, this oil is my favorite fragrance.  Period.  Nothing western, eastern, or other oil, etc. comes close.  Fantastic finish to my shave and start to my day.
L.M. (USA)

Agar attar is the History and Spirit of Oud woven in to finest, most comfortable fragrance I've every worn. For me, it invokes visions and feelings of a type of purple that only visits me when my eyes are closed.
P.W. (Canada)

The Agar Attar does it for me. Wow.
Customer (USA)

I must say that your new Mukhallat “Agar Attar” is absolutely great, everybody was asking me what I was wearing and could not believe that there is such a Mukhallat that contains such a beautiful Oud.
A.K. (Kuwait)

It is hard to believe that it is an attar and not pure Oud oil.
S.S. (USA)

Today I just applied Agar Attar, I've only been doing one swipe to start off, just wonderful! I've been smelling my wrist all day, once I had to stop myself as I was outside.
G.A. (USA)

You know, now my wife become one of your oud fans! She apply one swipe of Agar Attar EVERY NIGHT!!
Y.P. (Indonesia)