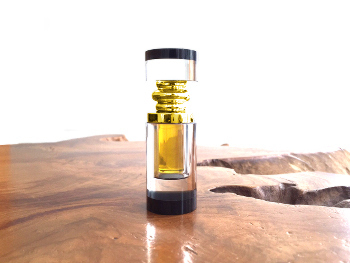 Hailing from the region of Bhamo in Myanmar (about 15 miles west of Yunnan Province, China), Bhamo breaks the 4-year dry spell where Agar Aura had no Myanma (Burmese) oud oils to offer.

It wasn't due to scarcity of wood; gallons of Myanma oils are pumped out every month. Yes, wild even.

Rather, the reasons for abstaining were 2-fold:
1) firstly, a large portion of the agarwood trade in Myanmar funds the ongoing Rohingya genocide, and I wanted to ensure that my money did not land in the pockets of the perpetrators.
2) secondly, although agarwood is readily available, high grade and high quality agarwood has become exceedingly rare.

The good news is that not only was the raw material for distilling Bhamo ethically sourced, but it was also our highest grade (dark) and highest quality (ancient) Myanma raw materials ever.
The wood was ground up, and after crossing countless hurdles, it was flown to Malaysia where its precious oil was extracted.

There are primarily two types of Myanma oils that are widely available -
There are the dirty 'barnyard' type oils that are the most rampant, and Myanmar ranks as the second worst offender (after Laos) in terms of production standards. It goes without saying, low grade (beige) wood constitutes the raw material.
And then there are those that are distilled using more hygienic techniques and clean apparatus, but also from low grade wood. They do smell pleasant, usually like citrus confectionery, but nothing like the aroma of sizzling Myanma agarwood chips... and of course, they are severely lacking in the mind-zap department (Agar Aura's forte).

In contrast, Bhamo smells exactly like vintage raw Myanma agarwood (and here you can see our colleague Russian Adam amazed by just how accurately that aroma is captured).
And more importantly, oud buzz addicts rejoice; suffice it to say that only two other oils from this part of the world hit the brain as hard as Bhamo.

Opening with a thousand-volt ZAP! to the brain, the first notes that greet your nose are sparkly and green, like the initial invisible wisps of vapor that rise from a Myanma oud chip on your heater. Subtle hints of peppery spices, herbs and wild flowers tickle the nose, with a backdrop of almost-Ceylonese-oud umami flavor. The silky 'fatter' notes roll out next, with plenty of honey, milky-woody notes, sun-baked sweet hay, and more bouquets of flowers.

But the most significant feature in Bhamo, which is completely devoid in low-grade Myanma brews, is what you will find in all royal-grade Agar Aura oils: a dense resinous spine. When heating sinking-grade oud chips, the wood sweats beads of oleoresin which drip and hit the hot coal / heating element, resulting in a sudden explosion of intense aroma (and brain zap).
That indescribable yummy awesomeness is the hallmark feature of all real high-end oud distillations.
And Bhamo has that in spades.

High grade. High quality. Meticulously choreographed. Hand-made to ensure the aroma and buzz were accurately captured.
At around half the price of many of her royal counterparts, Bhamo is one of the most affordable fully royal-grade oud oils ever offered by Agar Aura. Claim your bottle today and see what all the fuss (and mind buzz) is about.


Man... That bhamo... If anyone ever tries to make the mind buzz argument again...
I mean I may as well write a trip report... Putting that on right before bed wasn't the best plan... It literally gave me intense, full color fractal like closed eye visuals similar to a DMT landscape in a trip.
Tried it again last night before bed and had the same effect, very vivid closed eye visuals. Very beautiful.
C.D. (New Zealand)

To me AA Bhamo has this deep incense note kinda like spices with fresh green blended subtly. Then the big hitter is that “Kinam note” that keeps popping up time and again. Sure hits the brain hard like many other buzzers out there. People often ask about that mind buzz effect and I don’t think it’s just marketing, it’s just not on the level of what drugs would do which is what most people compare this “mind effect” with. To me it’s more about experiencing a sense of calm or invigorating effect. Depends on the oil and mood for me. Heightened senses basically though.
D.M. (USA)

From an opening which I've not experienced before with a blast of spices over fresh wild grass. My nose gets this prominent note when u stand next to a carpenter working on a piece of wood and when he slices it. That lovely woody note forms the Mid and Base. Over this woody note plays now the spices and green grass note but much mellow. All these guys perform the show BUT the show stopper is surely that Kinamic note which keeps appearing in mid - base.
D.P. (India)

For Bhamo I really enjoyed the resinous note. The mind buzz is stronger and I get ‘happy’ but a more quieter happy sense comparing to Royal Sumatra.
J.L. (USA)

This is a buzz galore. I couldn't write anything last night after applying as I was blown away by it and slept off.
A.P. (UAE)

Typically like many Indian oils which have flooded the market, they have this one strong barnyard aroma which makes you think of a farm, slaughterhouse, or manure. The Burmese oils I have smelt in the past also had that barnyard smell. Then came AgarAura. Bhamo is sheer beauty in a bottle which has the piercing honey color of Hindustan 1 and the Oudiness of another beautiful oil from Laos called Keo. A mind altering and brain numbing oil. Simply stunning and beyond beautiful is Bhamo!
A.K. (USA)

Ekdam KADAK (translation: whoa this is a ZAPPER)
B.M. (India)

Bhamo is utterly beautiful beast that zaps me every time
N.C. (USA)

My mind was blown
Customer (USA)

Don’t have words to say on the sheer beauty of Bhamo 😍
A.K. (USA)

both oils amazing in their own rights. tbh if i didn't know bhamo existed, i would think kyoryoku is royal level. Has an amazing scent and no lack in buzz department . But bhamo is a different beast. even up till now i gotta be careful because it has a tendency to blow my fuse very quickly. Massive sesqiterpenes kick just takes over like a tidal wave.
T.D. (USA)

Bhamo is amazing with an emphasis on the ZING. It zapped my brain alright lol
Customer (USA)

Man bhamo, I did an ultra deep breath today. Believe me or not "when you write about heart beat skipping, I thought it's just Rhoeteric". I experienced it today together with a Deep mental calmness. Every breath of Bhamo is pure brain number. Now I am getting the complete definition
A.P. (UAE)