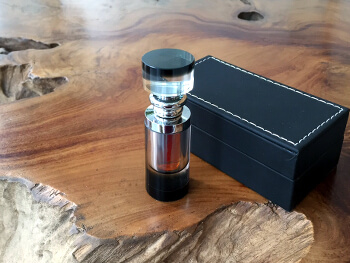 Khmer Khlem Chan.
Or in English, simply 'Cambodian Agarwood', because the name says it all.

Generally speaking, Agar Aura's philosophy is to not get bogged down by 'traditional' old-fashioned distillation methods, which often have many drawbacks when compared to modern distillation technologies and improved methods. Its not about reinventing the wheel, but rather making improvements which bring about positive results.
However, given the situation (or lack thereof!) of genuinely wild vintage Cambodian oud in the modern day market, I felt it necessary to re-introduce to the world one of the two old-school Cambodian oud genres.

The first vintage genre entailed fermenting the wood prior to distillation, and this is where the 'barnyard' note comes from, which is typically associated with most Indian and Cambodian ouds, both currently as well as historically.
The second genre was less common, and very few of the old masters produced ouds of this style. This, the 'sweet Cambodian oud' aroma (now made famous by the abundantly available cultivated Thai 'Cambodian' ouds), is the category that our Khmer Khlem Chan falls under.
(For those of you familiar with it, think Thaqeel – the original batch – by Abdul Samad Al Qurashi)

That's not to say we didn't make some modifications to the old style of cooking.
From stripping the inside of the cooking pots to getting rid of contaminants from prior distillation runs, the cooking temperature (even the cooking method), the collection method... in short, everything was in fact improved upon. But everything was maintained within the confines of what would be considered a 'classic' Cambodian oud distillation. All this in our high-tech modern distillation factory right here in Malaysia.

The result:
Bold rugged wood, toffee, nutmeg, honey and prune. A rich body of tobacco, liquorice and agarwood smoke. A smooth base of chewy resin and raw unburned Cambodian agarwood.

Khmer Khlem Chan, in my humble opinion, is the finest representation of the sweet classic Cambodian oud profile.
This is your opportunity to get a 100% genuine, wild Cambodian oud, of one of the two (the rarer of the two) classic styles.
Enjoy. Cherish.

The Khmer Khlem Chan is a beautiful expression, and a delight to wear.
I never lined up in the queue for Thaqueel, but I am sure this KKC will hold its own with any Cambodian oud before or since!
S.T. (USA)

KKC is all what I like in a cambodi oil. I'm glad I had the opportunity to experience what a true old fashioned cambodi oil smells like. That is a strong benchmark againt which other cambodi oild shuld compare and tend to.
A.K. (France)

Well the Cambodian Khan completes the hat trick. The dry down takes turns that are as distinct and compelling as the Berkilau and the Chen Xiang.
K.P. (Hawai)

Gee, Ta! I can’t believe how close this oil smells to Thaqeel 1!!! It is uncanny how many notes they have in common- dried fruits, tobacco, plum jam, cinnamon, vanilla, coniferous smoke and green almonds, to name a few. They both are opulent and lush, and their succulent richness is apparent from the opening notes all the way through their warm, woody drydowns. In fact, KKC’s drydown is slightly more robust and brilliant than Thaqeel’s! KKC boasts a zesty bitter orange note that I don’t smell in it’s sibling and Thaqeel has a hint of animalic sass that isn’t present in KKC . However both oils are truly radiant, and I am thrilled to add KKC to my collection. Now if you can only find a way to replicate it so I never have to worry about running out :-)
But, it seems this oil is already so popular, you probably don’t need my 1/2 cent :-)
M.W. (USA)

The Khmer Khlem Chan doesn't scream in the beginning but the strength is subtle and displays it's incense grade quality, first time I experienced oud of that caliber :-)
C.C. (USA)

I am very much enjoying Royal Chen Xiang and Berkilau. As well as Khmer Khlem Chan. I think they are all the best in their class and probably the best oils I've ever sampled or purchased from you.
Customer (USA)

Honestly, this is the FIRST time I've tried a fresh/new Cambodi oil which smells like my OLD Cambodis! Of course the age difference is evident, but not because of any olfactory serration, but rather the brightness is the dividing factor. Other than that, it possesses same delectable richness and jammy woodiness, with syrupy balsamic current tying it all together. YUM. This oil actually has distinct flavors of very old, and extremely thick balsamic vinegar from Modena, with powerful chocolate aftertaste and hints of ripe blackberries. There's a mouthwatering bread-y note which comes though after about an hour, like biting into freshly baked slice of sweet pretzel bread! I can't tell you how thrilled I am to have all my expectations met and exceeded with this oud:) Finally, a Cambodi oil that is not just a doppelganger of Thai! Having been so uninspired by the modern Cambodis I've tried, I'm officially a convert.
C.G. (USA)

I think I've mentioned this before, but while I LOVE Thaqeel, I've always felt it was a bit.. I dunno, suppressed in profile. Your Cambodi is so vibrant and alive, it shimmers and vibrates as it morphs through all its many evolutions. At the end of the day, after several hours of it on my skin, it still boasted of rich balsamic woods with fresh mossy trunks, maintaining its voice even after a shower! Yeah, I'm a happy camper today :)
C.G. (USA)

To a lover of Cambodian oils your distillation of Khmer Khlem Chan is a dream come true :-)  It is replete with voluptuous notes of moist Mission figs, plump monukka raisins, sticky dates and plum jam. The ripe golden-ness of sun-drenched tobacco is fused with the sweetness of Madagascan vanilla.  As the scent progresses warm, rubbed wood notes unfold beneath fleeting traces of the delicate green almonds and sassy cinnamon. The wood note becomes more pronounced as the oil dries down, and a talcum powderyness  surrounds it in a haze of softness and goose down. After the 4th hour, I smell an unexpected twist of bitter orange- a very minor but pleasant nuance.
The oil smells opulent- its sweetness is lush, dense and syrupy, unlike the Bazooka, berry sweetness of some plantation Thais. Khmer Khlem Chan is laced with breaths of coniferous smoke and wisps of green freshness that balance its resinous sweetness in the same way that a hint of bitterness enhances a cup of tea.
I could stretch my description to mention far-flung notes that can be smelled in flowers (heliotrope!), in the depths of exotic fruits (cherimoya) or the recesses of antique furnishings (myall?), but it would be more an exercise to stretch my olfactory receptors (imagination?) than to present the salient aspects of the oil…
The oil is moderately viscous and silky smooth, and when held to the light, it’s a clear, bright, yellow/orange, almost a sunset orange.
Khmer Khlem Chan is a luscious celebration of nature’s bounty. Although it might not appeal to people who prefer pungent, animalic ouds, it’s hard to imagine anyone not being charmed by this cornucopia of succulent fruits, gentle spices and mellow woods.
M.W. (USA)

It's nice and potent and is reminiscent of your past greats like Royal Kampuchea. It has a lot of plum and purple florals in it. Which I enjoy.
M.J. (USA)