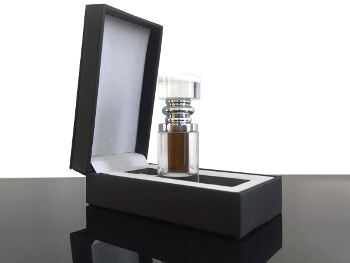 Quite simply, Royal Maluku is the simultaneously highest-grade and highest-quality Agar Aura oud oil ever distilled.
Now make that agarwood from Seram - an island in Maluku / the Moluccas Straits - which is notorious for its bitterly low distillation yield, and what you have here is an oil of a caliber that no one (including myself) would be in a hurry to cook again any time soon.

Royal Maluku is our fourth Maluku oil. Without going into the details of what it took to get my hands on this batch of wood, the only back-story worth noting is that the wood was intended for the wholesale Gulf Arabian market to be burned as incense – distillation of such a caliber of wood would be too crazy due to the low yield of Seram's Beringin agarwood. But the market demanded Cambodian and Indian, and nothing but, so the wood ended up getting powdered for distillation instead (notice the powdered coffee appearance of the ground up wood, the inimitable sign of a true high grade agarwood distillation – unlike the beige powders of oil-grade wood which are typically used for distillation).

Scent notes: steely marine blue, purple floral narcotic fumes, effulgent bittersweet green incense, the warmth of jungle earth, sizzling resin fumes frozen and captured in a bottle, dollops of orris butter, and sensuality beyond words.
But most importantly: this oil is the textbook definition of Gen3 "Mind Medicine" oud. The sheer energy and narcotic buzz will buckle your proverbial knees.

Are all oud oils equal? Does it matter what grade of wood is used for distilling an oud oil, so long as they're "distilled well"? You be the judge.

Below is a short video of the raw material that was used for distilling Royal Maluku, which demonstrates the tremendous quality of the resin-packed wood that this oil was distilled from:


Can't describe how beautiful this was 😍 officially top 3!
S.A. (USA)

This is one truly remarkable oil. I can't stop sniffing my wrists and analyzing the notes. They really do hit the right spot. The purple and blue notes really stand out at first and wash over me and give me warm fuzzies. I think of blue lotus and even lilac and definitely orris butter. I get beautiful incense and earth notes just beneath the opening narcotic notes. Just heavenly. It's a metaphysical buzz. What a feat.
A.S. (USA)

As I get ready to go out tonight it is royal maluku time. Mike drop. Holly molly. Cat got my tongue. Words don’t do this justice.
R.S. (Canada)

Malaya is progressing very nicely, great to watch but RM just blows me away 😁
N.S. (Australia)

When I took the first whiff of the sample vial... I said to myself it's the best Oud I have experienced till date... though this was a month back... now this is developing into something even more special
D.P. (India)

The scent is indescribable IMO prob because your brain cells r fried by the sesquiterpenes. I did smell the same note that was in Malaya and msk as part of the top note. It’s almost like the heart note of Malaya is on the top. There was this bitter medicinal note somewhere in the mix also. I did feel the brain buzz that everyone talks about. It really does make your brain buzz.
RM smells just like high grade seram wood on low heat.
Basically what I noticed is that there is this one green note that is present some in msk... a lot in Malaya and bam in your face in RM.
N.C. (USA)