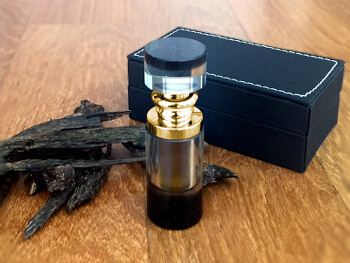 One of the most talked-about oud oils in the history of Agar Aura was Ayu.
Hailing from the very same State of Kedah in Malaysia, and boasting the same captivating scent genre, Malaya is Ayu... and then some.

The scent profile itself is nearly identical to Ayu. There's the same cola, together with tamarind jam, vanilla, cinnamon, rock rose, lemon and lime, doused in jaggery syrup.
But...
Malaya is very thick around the middle. Yes, its still a lean mean fully Gen3 oil, but the sheer quality of the raw material lends it a density, that oudy 'marrow', that is the hallmark of top-shelf oud which simply cannot be mimicked by distilling lesser grades of agarwood.
Think Ceylon No.1, Royal Malinau, or Pencerahan.
And speaking of Pencerahan, Malaya is the closest to it in terms of scent texture and density.

If you love the aroma of OUDY oud, you can't miss out on Malaya. But more importantly, if you're a junky that loves the mind effects of top-shelf oud, then top-shelf Malaysian oud should be at the top of your list. Malaya packs a mighty K.O. punch that will hit you right between the eyes, and send your mind to a different space.

Malaya is a beast... like tazmanian devil in your face... it’s a sesquiterpene tornado around your brain... and it made my lip numb
N.C. (USA)

My favorite, green/brownish, hints of nuts, then refreshing Citric notes, but not too fresh, rather cesty and a lil bit bitter, then again woody&spicy
B.S. (Austria)

I just walked into work and someone goes u smell like incense lol... aka Malaya
N.C. (USA)

Amazing if this is what AA oils feel like then I'm late and may be missed out on many beauties
D.P. (India)

I revisited the Malaya again last night and all I can say it blew my fuses.
A.K. (USA)

Just spent the last half hour with Malaya. Wow this is a great oil 👏
N.S. (Australia)

You know im tempted to get another malaya cuz i just love that profile
T.D. (USA)

Having a Malaya morning.
mashAllah really pleased with this. Getting alot of much needed psychological relief through it right now.
T.G. (Dubai)

So I was sitting at my table...from across the room I get a Powerful whiff of oud. I look across and my kids and found my lost (and practically empty) sample of Malaya and had opened it. That's what I call projection 😆
T.G. (Dubai)

I had tears in my eyes of just how perfectly crystaline and pure the notes are and that oudy oid marrow underneath is what kept me coming back for more.
R.S. (Canada)

Terpene overload. This is mind medicine first and foremost then a scent. A richer more viscous fuller and touch more purple cola nut juice. If three bottles of ayu were squeezed in one and couple drops of purple kinam added, and a whisper of smoke the results would be malaya
R.S. (Canada)